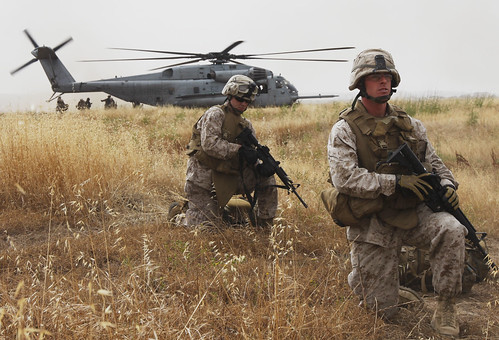 Marine Corps Base Camp Pendleton is home to the I Marine Expeditionary Force and serves as the USMC's prime amphibious training base on the west coast. It is bordered by Oceanside to the south, San Clemente, Cleveland National Forest, Orange and Riverside counties to the north, and Fallbrook to the east.

Amphibious and sea-to-shore training takes place at several key points along the base's 17 miles of coastline. The main base is in the Mainside Complex, at the southeastern end of the base, and the remote northern interior is an impact area.

Learn More About Camp Pendleton
This sprawling training base occupies over 125,000 acres of land, including 17 miles of undeveloped land on the picturesque Southern California coastline. The base’s diverse terrain offers amphibious and sea-to-shore training opportunities in addition to many large desert “tactical playgrounds.” It is located in the northern reaches of San Diego County, with downtown San Diego just 38 miles to the south. Los Angeles is roughly 82 miles to the north, but many Orange County attractions are just a short drive away.

Marines Get Last Delivery of Iconic H-1 Helicopter. But Don't Call It the 'End of an Era' Yet
This Week's Top Military Photos: Show Me Your War Face
Marine Corps Halts Surf Use of Combat Vehicle After Mishap
View more